Hill, Betts & Nash LLP is one of the last original New York City boutique law firms specializing in admiralty and general maritime law. Hill, Betts & Nash LLP, (“HBN”) specializes in matters relating to the maritime industry and has represented some of the most well-known and highly respected companies in the transportation and logistics industry since its founding in 1898.

HBN represents clients in many different areas of law other than maritime law, such as commodity and international trade, product liability, trucking, environmental and property damage.

HBN attorneys have represented and continue to represent some of the largest shipowners in the United States.

The marine industry is not foreign to its insurance carriers, as everything they do, or is done to them, will most likely affect its insurance.

HBN’s attorneys are not only lawyers, some are Merchant Mariners or USCG veterans with a complex understanding of the inner workings of various vessels.

The core of any corporation in the maritime industry is the understanding of compliance and  regulations in the US and internationally.

How Can We Help?

HBN’s longstanding position as a maritime firm in the heart of New York City can only be attributed to its team of lawyers who navigate the complex and unique concepts of maritime law. Our lawyers have years of experience that set them apart from many other lawyers in the maritime field, such as shipboard service in the Merchant Marines and United States Coast Guard.

When you choose Hill, Betts & Nash you are not only choosing legal scholars, but also expert mariners.

HBN represents their clients in navigating the difficult intricacies of Maritime Law, also known as Admiralty Law. Maritime law takes its precedence from – not only statutes and common law – but also from ancient principles of international law.

Maritime law is a distinct body of domestic and international law made up of international conventions, treaty, and domestic statutes which governs legal issues arising on navigable waters. These issues may include disputes stemming from shipping, logistics, and navigation, as well as, personal injuries that occur onboard vessels in navigation. Generally, maritime law operates under the exclusive jurisdiction of the federal courts, except for a few statutes such as the Merchant Marine Act of 1920, which allows for injured seaman to bring a claim in state court. 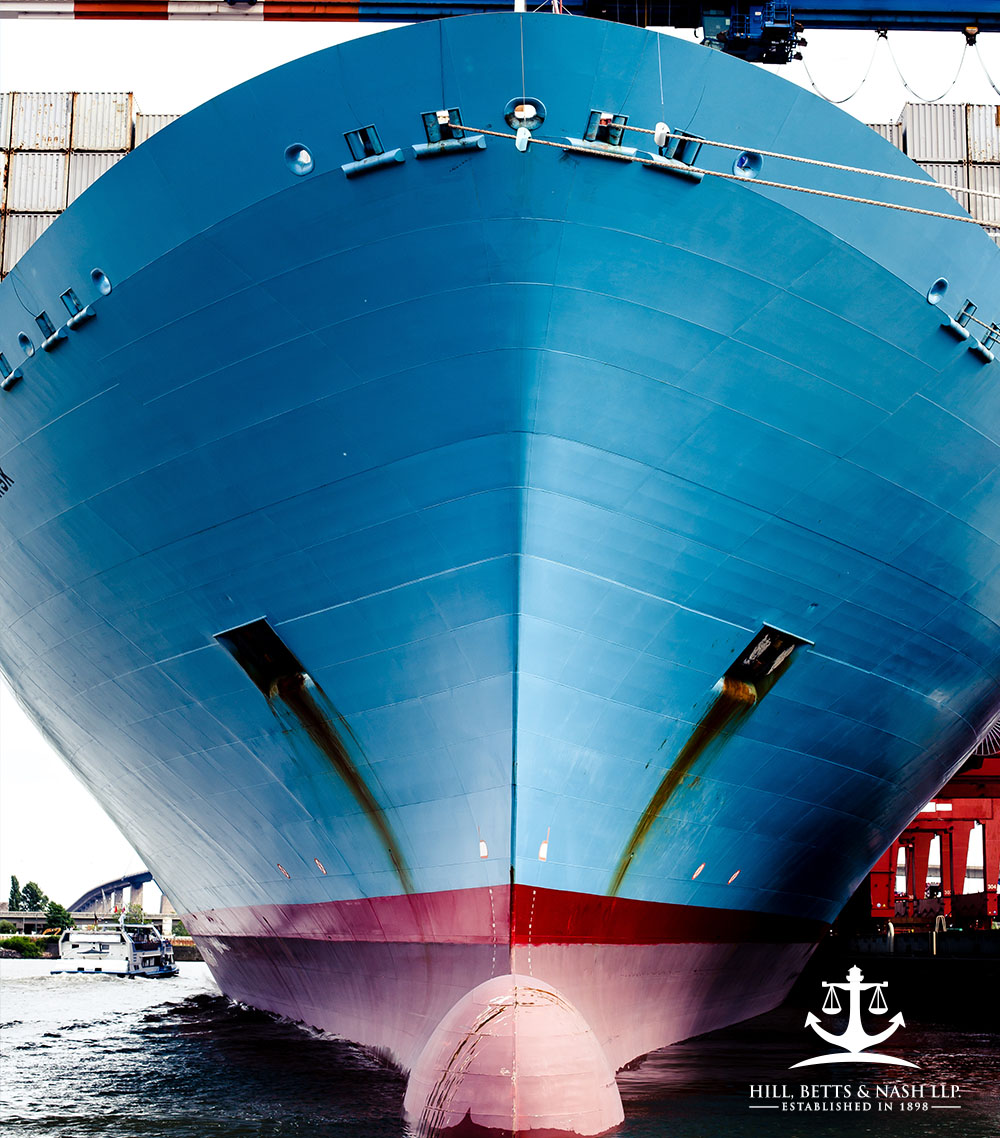 Maritime law is not an area of law that many lawyers are competent to practice. It is filled with unique and complex issues that touch on many different aspects of federal and state law, and requires a specific uniformity amongst the many federal courts in the United States. For instance, if a seaman is injured onboard a U.S. flagged vessel, their case may touch different aspects of maritime law such as marine insurance, charter parties, marine casualty investigations, and regulations. But this is just a small sample of the various maritime specific areas that may be affected by any one dispute. That is why it is important to not only have a maritime lawyer who specifically practices in this field, but also a lawyer who has in-depth knowledge and first-hand experience aboard vessels. In that way, your attorneys are able to physically step into the shoes of the crew and provide the best legal advice in the maritime field. These lawyers are some of the most integral members of the team at HBN. Not only do they know the complex laws surrounding maritime claims, but they also know the complexities of how a vessel operates and are able to spot legal issues that lawyers without this experience would not. At HBN, we strategically employ former mariners as attorneys to ensure our clients can navigate the treacherous waters of maritime law.

Hill, Betts & Nash LLP is proud to announce the launch of our new website at www.hillbetts.com.

Learn more about what Hill, Betts & Nash LLP can do for your business.